Hear ye, hear ye! Her Royal Highness Princess Charlotte Elizabeth Diana of Cambridge arrived last Saturday and as to be expected, the world is still buzzing about her grand entrance.  After much anticipation, the news of the little bundle of joy spread quickly and social media nearly exploded with the reveal that William and Kate gave birth to a beautiful baby girl.

As the #1 topic that was trending globally, people from all over the world joined in the conversation about the new princess. Here are some fun social media facts and stats about the #RoyalBaby’s arrival:

Not only were news outlets and people everywhere posting about the #RoyalBaby, but also a number of big brands took the opportunity to chime in the baby banter on social media.  Here are a few of my favorite tweets from big brands: 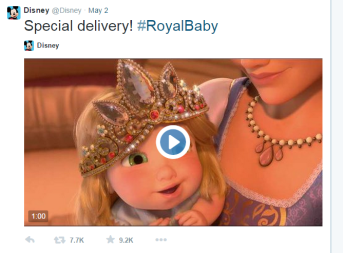 @BritishAirways got creative when the Princess touched down: 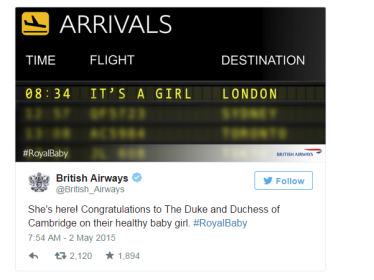 @Nissan got the royal chariot running: 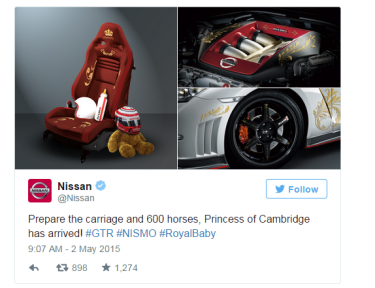 @MLB reminded us that it has Royals babies too… 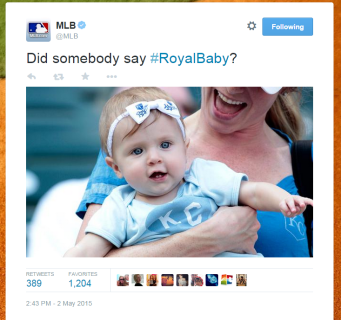 @CocaCola_GB shared the love with the Royal Family: 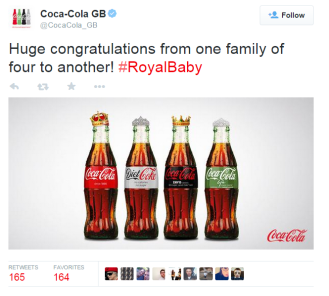 @PizzaHutUK even had a special delivery of its own: 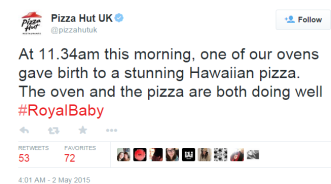 I loved seeing all of the baby banter that has been going on and loved that many brands used this real-time event to engage their followers.  This is a great example of brands thinking outside of their “strictly promotional” box and coming up with creative ways to stay relevant in the conversation.

To see some additional brands that posted about the #RoyalBaby, check out this article on Buzzfeed: http://www.buzzfeed.com/tomphillips/hashtag-engagement#.anE85Vkqx

To see some brands that had a #RoyalFail, check out this Mashable article: http://mashable.com/2013/07/23/royal-baby-real-time-marketing-brands/

Did you join in the Twitter-chatter about the #RoyalBaby? What did you think of some of the brands that joined the baby conversation?